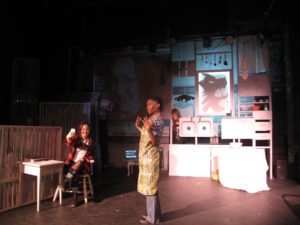 Asheville Creative Arts’ newest production, The Little Red Riding Hood Show by Russell Davis, is a trippy take on a timeless tale that is known the world over. It runs through Sunday, April 9, at The Magnetic Theatre. This fact is pointed out early on by the ultraself-aware Red, who is a modern teenager trapped in an old-world story. Meanwhile, her smart phone is a permanent extension of her hand, it would seem. The need to capture and share her life on Facebook live is as much her central preoccupation as is preparing for her trip through the woods to Grandma’s house with a basket of goodies.

The stage is an inventive tapestry of realism-meets-abstraction, thanks to the clever direction by Abby Felder and Katie Jones. Red’s mother’s kitchen is vertical, arranged on an upstage wall. The sink, the cabinets and utensils are all realistic, but the arrangement is far from it.

Red’s mother, played by Daniele Martin, tries to warn the teen about the dangers outside. And Red even becomes aware of the dangers when she sees the big bad wolf lurking outside the window. Julia Cunningham’s Red is in an entranced state, streaming herself live (which is projected onto the back wall of the theater). All the while, a pulsing musical beat plays underneath, giving a sense of dread and creating a tone that feels right out of a David Lynch film.

The wolf, played with a sly sparkle by the singularly named Tippin, is a pesky sort. She is also aware that she is in a story, but is determined to make things as difficult as possible for Red along the way. Once the journey begins, Red wants to keep the real story going as it should.

Grandma, played by George Awad, giving us a burly man variation of the would-be matriarchal victim. Grandma is also aware of the predestined fate she will suffer should the tale continue unabated. It is then that Grandma turns to the audience and recruits a couple of folks to join her in trying to outwit the wolf. Given “I was eaten by the big bad Wolf” t-shirts, the audience members join the antics for a good portion of the show’s climax.

Asheville Creative Arts bravely tackles a show for children that is also designed to appeal to adults. Some of the peculiarities of the show are interesting to watch for the grown ups, while flying over the heads of the youngsters in the crowd. Adults will be thinking of things like A Clockwork Orange and “Twin Peaks” as they experience the sites and sounds. Children are just transported by the easily relatable social media savvy of Red, and the overt humor of Grandma as a man in drag. There is plenty to keep the audience intrigued.